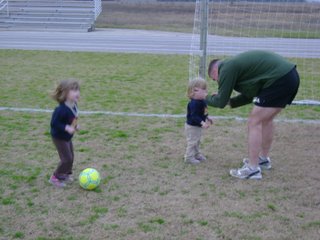 Daddy trying to explain to Annabelle that we don't use hands.... 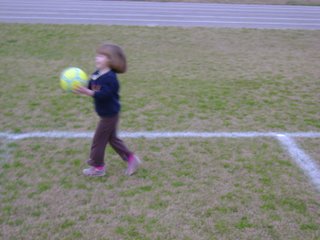 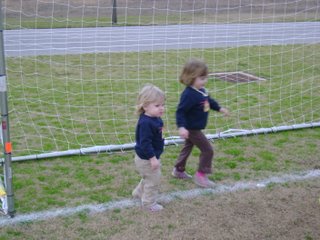 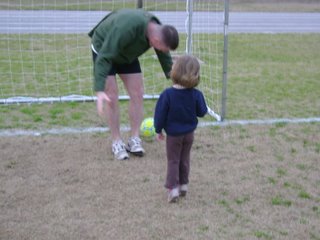 She shoots, she scores!
Posted by AER at 7:32 AM No comments: Links to this post 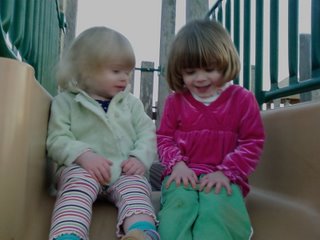 Posted by AER at 5:57 AM No comments: Links to this post 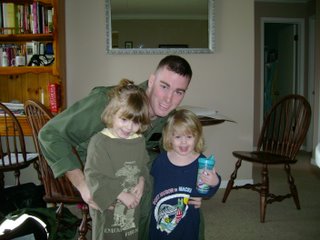 This morning, Grace and Belle decided that they wanted to wear Daddy's clothes.
Posted by AER at 8:52 AM 1 comment: Links to this post 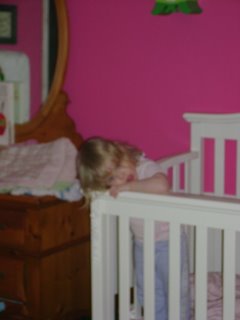 Since discovering that she could climb out of her crib quite easily, Annabelle has been having a very difficult time going to sleep. Hesitant to put her in a toddler bed (because really - both of them with free reign to play all night long did not appeal to Eric and I very much at all. And if she proved to be anything like her sister, she would stay up for hours playing and making mischief) we tried to simply leave the door open, hoping that knowing that we could see her would deter her from climbing. We tried this for two nights. The first night she recorded an impressive 18 trips over the side of the railing, culminating in her pulling some books off the shelves and ripping the pages out (no doubt a protest to our insistence that she stay in her bed). The second night is what you see pictured here. She stood at the end of her crib starring at me, waiting for me to look away for just a second, hoping for me to glance away so she could escape and steal a few moments of fun before the warden put her back in her cell. She did this for hours, and towards the end she was about to fall asleep at the rail...so determined to do anything but sleep.


(You can't tell because of the flash on the camera, but this picture was taken at almost 11pm)
Posted by AER at 6:15 PM No comments: Links to this post 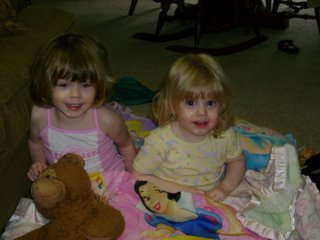 What better way to spend a cold and rainy morning than curled up with your sister watching a movie? Both girls had their blankets, princess pillows, and appropriate stuffed animals as they watched "The Little Mermaid." unfortunately the bliss pictured above was short lived, as moments later Grace decided that Annabelle was no longer allowed to be anywhere near her or her things (because according to Grace, EVERYTHING belongs to Grace). But it was nice while it lasted.
Posted by AER at 6:05 PM No comments: Links to this post