To Awa, Dude, Uncle Bob, Andy, Mike, Nami, Geet, Geoff, PJ, Dave, Christopher, Cara, Nana, Pop Pop, Uncle George, Uncle Kevin, and all our family and friends that we could not be with today: We hope you had a wonderful Easter. We miss you and Love you all very much.
Posted by AER at 6:42 PM 2 comments: Links to this post 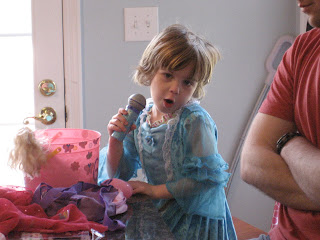 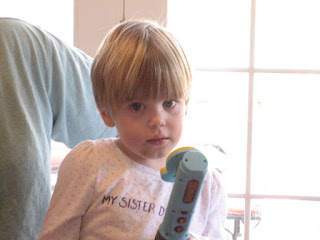 Posted by AER at 6:34 PM No comments: Links to this post 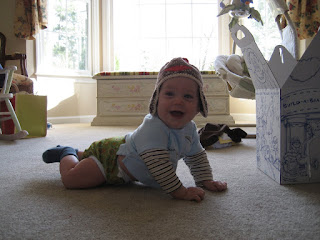 Posted by AER at 6:32 PM No comments: Links to this post 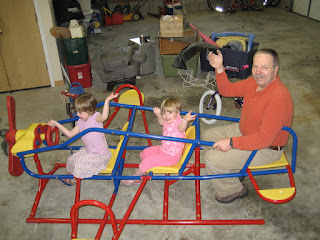 Here are the girls and Grampa playing with their new airplane.
Posted by AER at 6:11 PM No comments: Links to this post

I heard this as I walked past the bathroom. The girls were inside.

GRACE: Isn't this great Bellie?! She thinks were are going potty. We can do whatever we want!
BELLIE: (maniacal laughter)

I knock on the door. 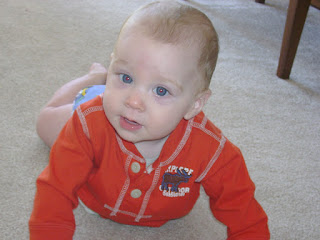 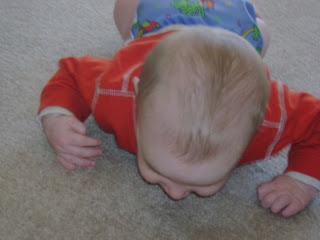 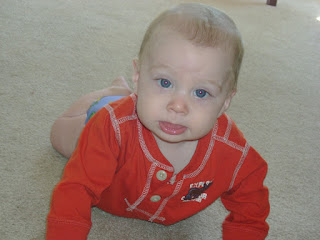 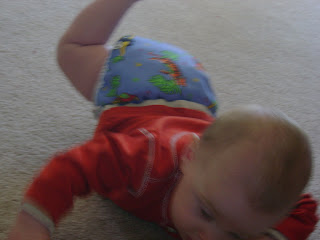 Posted by AER at 11:46 AM No comments: Links to this post 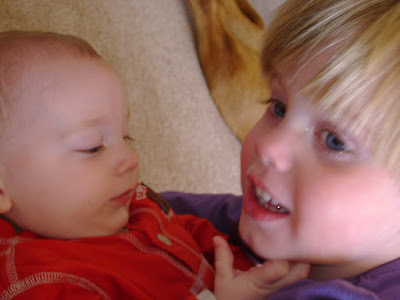 Posted by AER at 3:12 PM No comments: Links to this post 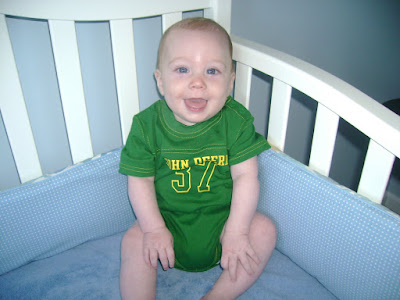 Posted by AER at 3:10 PM No comments: Links to this post

One of Those Days

I will start this by saying that the reason that there is no picture with this post is that as I sit here writing, the kids are all nestled sweetly in their beds and frankly I do not want to look at them right now. Yes, it has been one of THOSE days.

Understand that it started out innocently enough, with the children waking Eric and I no earlier than usual. But since we had a night out on Friday and our heads did not hit our pillows until about 3 am, (no snickering here...how often do we get to do that? That's right, just about never) we were still moving a bit slower than normal. We went out for a family brunch. It was fabulous. We came home and played outside in the glorious Saturday afternoon weather.

So you are probably wondering exactly when it became on of those days? Well, that would probably be right about when Annabelle decided to shove a partially popped popcorn kernel up her nose.

I didn't see her do it, but as I was folding some laundry, I couldn't help but notice an awful lot of sneezing. I saw her with her finger up her nose, which unfortunately is not all that unusual, so I figured that she done something while digging around up there. She found me a bit later and asked if I could get it out of her nose. I asked her what was up there, expecting her to say "boogers" but instead she said "popcorn seeds." She then lied down and started wimpering a bit.

I will spare you the play by play of actually removing it, but I will just say that it took quite a while and involved all kinds of tools that normally you would not want anywhere near your nose. Finally with a POP as the snot seal was broken, out came the "popcorn seed."

Now, I am know you are wondering what Michael could have done to add to the days festivities. And if I am being perfectly honest here, I will have to take the blame for this. As I picked him up to get him dressed for bed, the girls ran by screaming and I knew as soon as I stood up straight that something was very wrong.

You see, a mother knows when she pushes ever so slightly on a certain part of the tummy that is almost assuredly going to make the child vomit. No matter how many times it happens, you always realize what you have done when it is too late. By the time I realized that George (following the screaming girls) was going to be directly in the line of fire, it was too late to stop Michael from vomiting all over him. The dog moved to the side just fast enough to ensure that the vomit also got all over the carpet.

After cleaning this up and placing the child in bed, I come down to the kitchen to see the girls eating Miracle Whip out of the jar. This actually makes ME want to vomit. When I questioned them about it, Grace proclaims that it was an accident. She seems to think lately that if something is an accident that she cannot get into trouble. Which leads me to my last example as to why today was one of those days.

Grace was explaining to me that her going into the fridge and taking out enough food and drink to make herself a picnic feast was an accident. Our conversation went like this:

Me: Grace, did you do this? (pointing to the things she had taken out)
Grace: Yes, but it was an accident.
Me: I don't really see how you could have gotten all these things out accidentally. You did it on purpose, didn't you?
Grace: Yes.
Me: So why did you say it was an accident?
Grace: Mom, do you think I WANT to get in trouble?
Posted by AER at 5:08 PM 1 comment: Links to this post

The girls were riding their bikes today when we got home from school. Since it began raining, I got them into the garage to put their bikes away. Grace did NOT want to come in and quickly ran back outside before I could get to garage door down. She then proceeded to stand in the rain and cry: 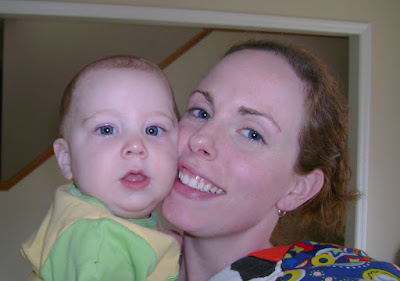 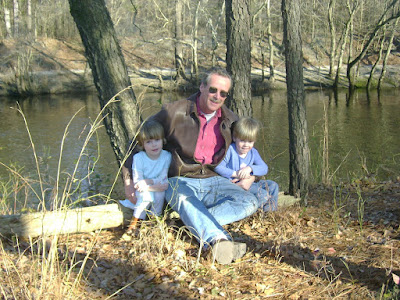 We had such a great time with Geet during his visit! Hopefully he can come back soon. Maybe he will even bring his friend, Nami.
Posted by AER at 1:28 PM No comments: Links to this post 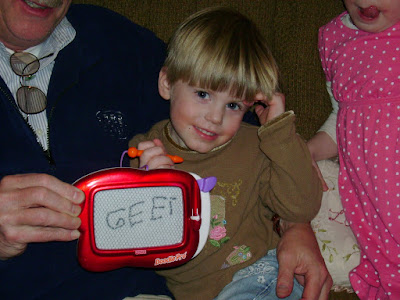 Annabelle practices writing with her Geet.
Posted by AER at 1:25 PM No comments: Links to this post