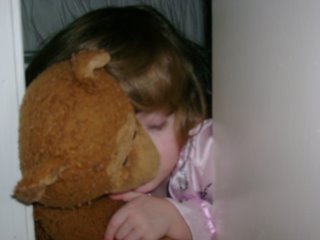 Life is undeniably rough when you are three. So many toys, so little time, people to wait on you hand and foot, etc... Miss Grace has been having a very difficult time deciding where to sleep lately. Unfortunately, her lovely full-sized bed does not seem to be an option for her, so I have found her asleep (or trying to get to sleep) in some rather unusual places. Some of the exotic locations include her closet, under the table in her room, and (my personal favorite) tucked behind the pedestal sink in her bathroom. She had also placed the stool the girls use to reach the sink in front of her to shield any noise that might keep her awake (or more likely to keep me from spotting her.) The above depicts her sleeping on the floor, with her door open just wide enough to fit her head and Papa. This has made each and every night a little exciting, wondering where I will find her curled up next.
Posted by AER at 9:42 AM No comments: Links to this post 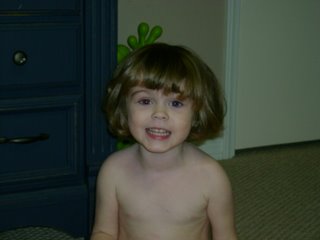 I would think that after twenty seven years on the planet I would have a pretty good grasp on how to play hide and go seek. I guess that was my mistake, because it has become very apparent that I had never really played until I started playing with Grace.
First off, forget about taking turns. Grace will let each player know who will being doing what. She even takes it a step further by telling you exactly where you will hide. Last night she wanted to play a little before bathtime, so Annabelle and I stood in the kitchen and received our orders on how the game was going to be played.
"OK Mama, I will count and you will hide. You will hide on the couch in the living room. Bellie will go with you okay?" (She says "okay", like she is asking you a question, but we all know it is not a question at all.)
So Annabelle and I go out to the couch and wait for her to count to 10. When she comes out, yelling "Look, Mama I found you!" she suddenly throws herself to the ground, kicking and screaming. If I didn't know her so well, I would think that maybe she stepped on something or did something else to hurt herself. When I could finally understand what she was whining, I had to laugh...she was upset that we were sitting on the wrong cushion on the couch. Apparently we were supposed to be on the middle cushion. Needless to say, that was the end of the game.
Posted by AER at 7:17 AM No comments: Links to this post 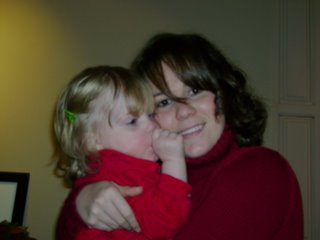 After sharing a bedroom for most of our stay at Nami and Geet's house, Annabelle and Cara grew quite close. They got to spend quite a lot of time bonding, so when this came up when we were looking through pictures this morning, Bellie was very excited. She was pointing and clapping and even gave the computer screen a big kiss. Hopefully it won't be too long before we see Cara again.
Posted by AER at 7:35 AM No comments: Links to this post 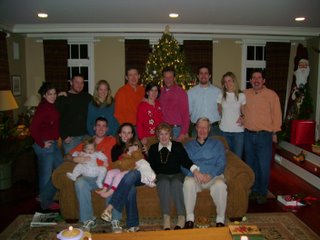 Ok, so I got the camera for Christmas (thank you, Eric), took lots of pictures over the holidays, made it home safely from Connecticut, figured out how to connect the camera to the computer, AND found some time to write to you people without two little monkeys crawling all over me. (For those who have asked what has taken me so long, I think that should answer your question). So, I thought for my first entry I would post a pic of everyone (except Geoff and Quip) we spent Christmas with in Connecticut. We miss you all!
Posted by AER at 11:06 AM No comments: Links to this post