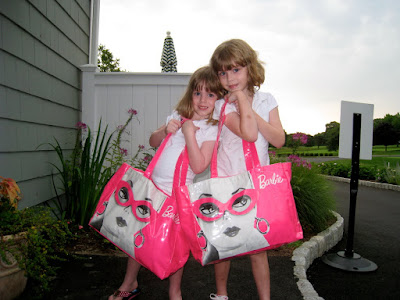 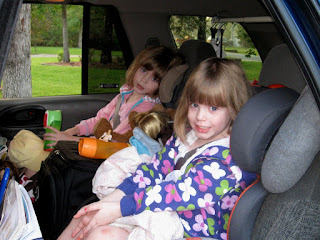 Annabelle and Grace are off on another Excellent Adventure with Nami and Geet. They left at about 6:30 this morning (which is why Grace looks a little less than thrilled - she is actually very excited, it is just *very* early for her) to be able to make a Ferry ride this afternoon. I miss them already.
Posted by AER at 5:51 AM No comments: Links to this post

Faith has been in no hurry to walk. At a little over 18 months, she is just now starting to walk around in the house - albeit only when absolutely necessary. At her last checkup, the pediatrician suggested we only pick her up when she could not get to where she needed to be on her own (as in when getting into her crib, high chair, car seat or stroller). He said she wouldn't like it at first, but eventually she would get tired of crawling and discover how much she loved walking.
I think perhaps he underestimated her will to crawl.
If in the first picture you aren't noticing anything unusual (besides the face of a child who clearly is not in the mood to be photographed), please scroll down to picture number #2. We shall call this exhibit A. 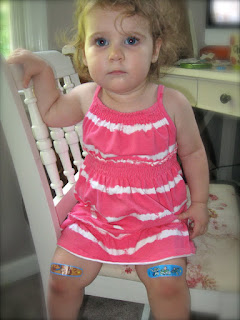 These bandages are covering the scrapes on her knees from crawling on the driveway. She had many toys to ride on, grass to crawl on, as well the ability to *gasp* walk around. Nope, she decided it would be more fun to crawl on cement until bloody. 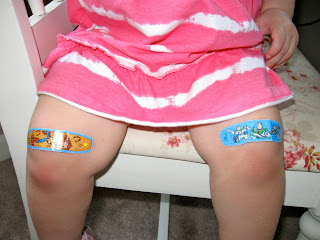 One would think that crawling on cement would be painful, that there would be tears... Apparently not. She was laughing and chasing her brother around when I picked her up and noticed that she was bleeding. 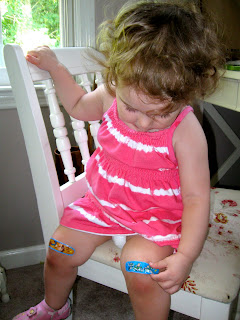 And in true stubborn form, apparently she won't be keeping the bandaids on either.
Posted by AER at 9:08 AM 1 comment: Links to this post

It has been super hot here - just like everywhere else. Yesterday we beat the heat by filling up the mini pool on the deck and having popsicles. 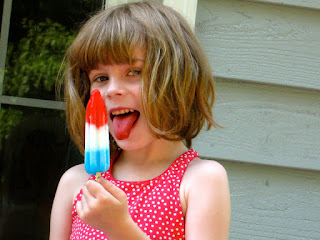 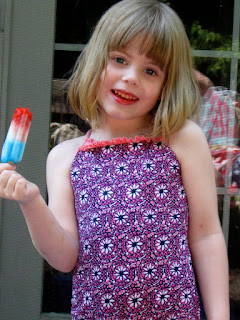 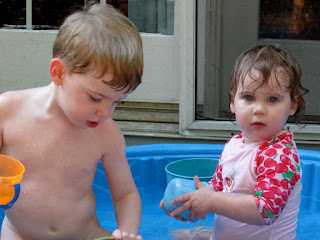 Posted by AER at 6:28 AM No comments: Links to this post