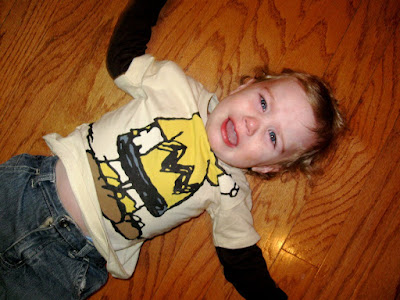 Here are some pictures from the feasts the girls had this week at school. I was sad to find out I was not invited to Annabelle's feast (apparently it is a kid - only event. Very exclusive.) At least she got to wear the turkey shirt I had made for her. 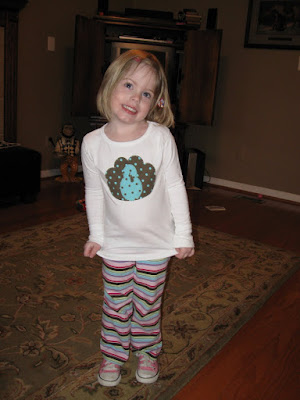 I was able to attend Grace's feast. She had made a headband, vest, necklace, placemat and place card for the occasion. 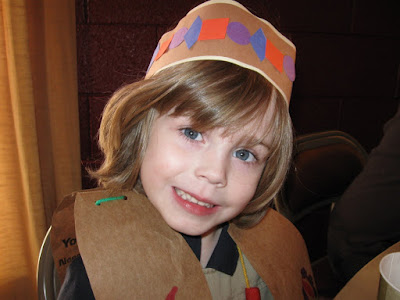 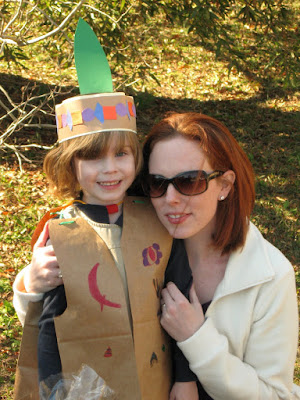 Posted by AER at 11:23 AM No comments: Links to this post

Everyone seems to have a cell phone attached to their body these days, and now you are never more than a few clicks form your inbox. But that just doesn't compare to being able to see your loved ones talking right to you.

Being far away from family and friends just got a little bit easier. You must check out TokBox, a free (yes, I said free) online service where you can send video email messages and make video calls.  Have family in a couple different places? Then try a video conference call and be together in cyberspace all at the same time.  You can even send themed greeting cards, complete with a video message.
With your internet connection and a webcam, you can do more than just talk about how your kids are growing. You can let your family and friends actually see for themselves. TokBox is easy to use and for no charge, how can you resist?
Posted by AER at 12:00 PM 1 comment: Links to this post

SeatSnug: A Safer Way to Ride

It is not unusual for me to look in the rearview mirror and see one of my kids tipped to one side in their booster seat. Either from trying to reach something that fell on the floor or attempting to hit the nearest sibling within reach, the girls are constantly pushing the limits of the seat belt. Not only does this drive me crazy, it certainly is not safe. And if they are able to wiggle and wriggle their way across the backseat, I am pretty confident they are not very secure in general, and most importantly they are not safe if we get into an accident.
That is what makes the SeatSnug such a great tool. It is used with a booster seat to keep the wiggles from loosening the seatbelt. Attaching to the seatbelt in your car, the SeatSnug keeps the belt snug to their hips and prevents slack, gapping, looseness and anything else that is caused by the inevitable wriggling that goes on. 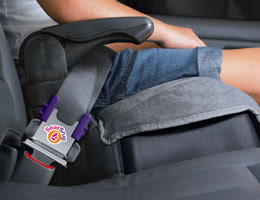 Not convinced? Check out the SeatSnug website and watch the videos of the SeatSnug in action. Or, if you are in the neighborhood, you can catch a ride with the kids and I and we can do a little off - roading.
The installation is really simple. (There is a video on that, too). But as we all know, sometimes you have guests so you need to do a little rearranging in the car. The SeatSnug doesn't have to be removed, you can simply turn it too the off position when someone who doesn't need a booster seat is riding along.
It is amazing to see the difference once the SeatSnug is installed. You think that the booster seat itself is enough to keep your kids safe. Surely a booster is better than nothing, but a SeatSnug is so much better than a booster alone.
Posted by AER at 7:36 AM No comments: Links to this post 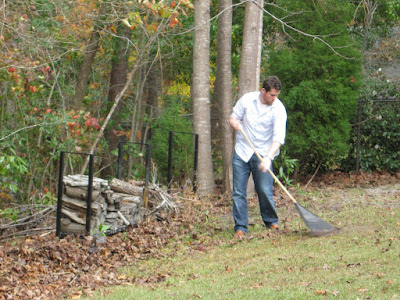 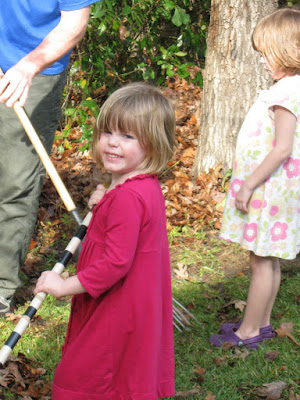 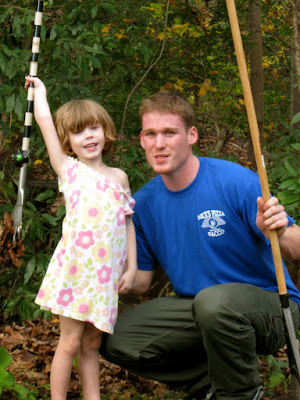 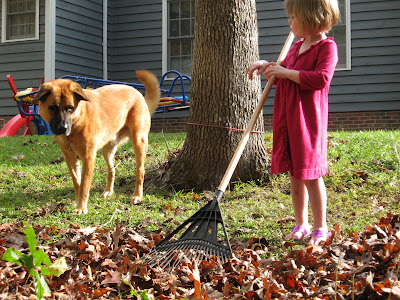 The girls had so much fun raking leaves with their Uncles. I wish I could tell you the yard still looked beautiful and leaf-free, however Mother Nature made sure it didn't last too long. But now that the girls know how, I plan on sending them out to do it again. No free rides here.
Posted by AER at 5:03 PM No comments: Links to this post 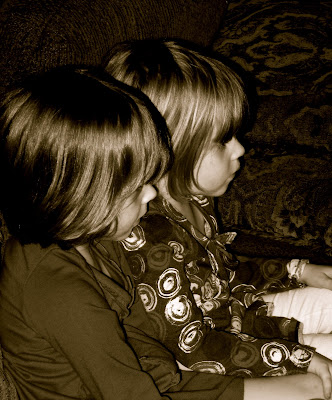 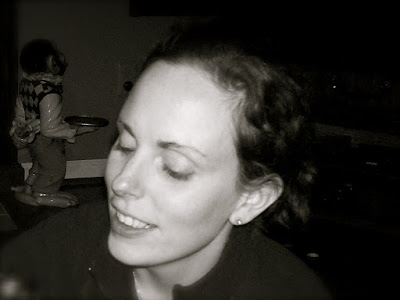 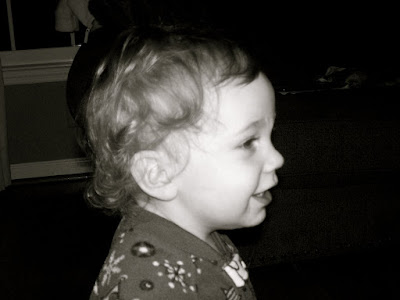 Posted by AER at 8:22 AM No comments: Links to this post 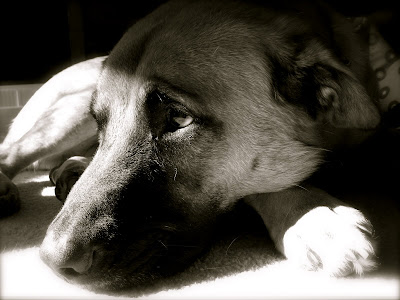 Posted by AER at 8:05 AM No comments: Links to this post 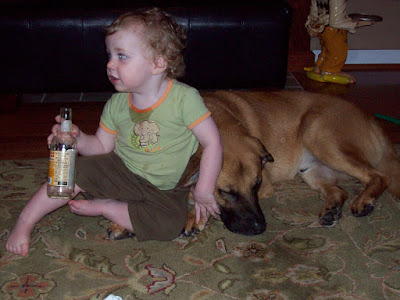 What happens when Uncle PJ and Uncle Christopher are left alone with the boy?
I find my son smelling like a brewery, clutching an empty bottle of Newcastle. But, as they pointed out, he was NOT crying.
Posted by AER at 7:22 PM No comments: Links to this post

Both Grace and Annabelle woke up a bit under the weather this morning, and spent much of the day early on curled up on the couch watching movies. Grace decided she would feel better if she looked a bit more like a princess, so she announced she was going to change. I was expecting her to come down and have one of her princess dress-up dresses on.
She was taking quite a while, so the rest of us ventured upstairs to see what she was up to...
This is her princess creation. 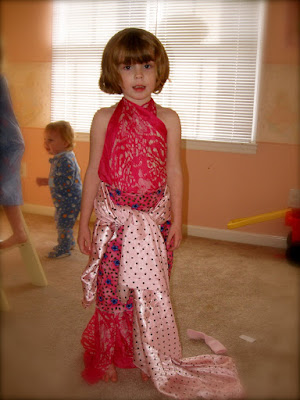 It is made from three pieces of her fabric and she put the whole thing together all by herself. 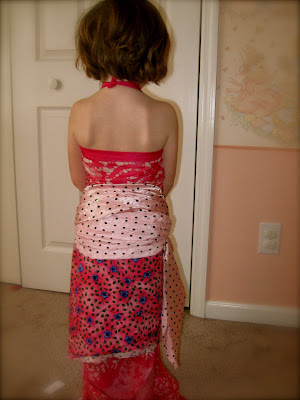 I don't know why I bothered making her Halloween costume for her. I think she has a pretty good handle on things, don't you?
Posted by AER at 11:11 AM 1 comment: Links to this post

Barbie and the Diamond Castle 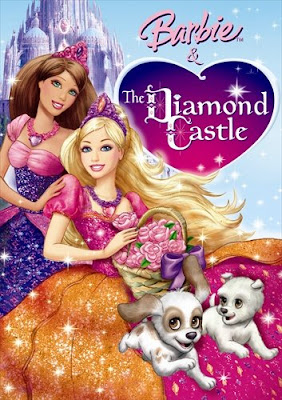 Before I saw my first Barbie movie, I would never have thought that her movies would be so incredibly popular with the girls. I can't remember which one it was that we had first, but now we own (and frequently watch) all of them.
When we received Barbie and the Diamond Castle, Grace and Annabelle were so excited. They snuggled up on the couch and watched the entire thing without moving. It was fabulous. The second time (which may have been immediately following the first) they switched between sitting and watching intently and signing and dancing.
The movie tells the story of two friends, Liana and Alexa, who try and help save the muses of music from the evil Lydia. With the help of Melody and a few other friends, the girls struggle and sing their way through this adventure.
I think the music is my favorite part of this one. The story line is nice, but the music is really great. Unlike so many children's movies that make you want to shove something sharp and pointy in your ears, the songs in this movie make you want to sing along.
After the movie, a cover of the song Connected is sung by Katharine McPhee (former American Idol contestant). It is safe to say we have played that video so many times I am expecting it to wear out the DVD.
I don't mind when the girls want to watch this one over and over. In fact, when they can't decide on a movie for Friday night pizza and a movie, I often suggest this one since I know I will be entertained as well.

Today was the Fall Festival at St. Anne's. In reality, it is three hours spent pumping the kids full of sugar, followed by an excited 15 or so minutes in the moon bounce and finally a crash of epic proportions.  The kids had a blast and actually the crash has not been all that bad - so far. 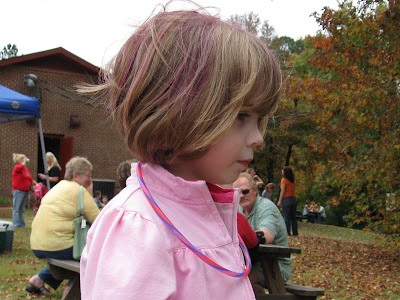 Grace got her hair painted with purple stripes, which are fading fast and she is trying to figure out a way to keep them. Annabelle wanted nothing to do with the hair painting. 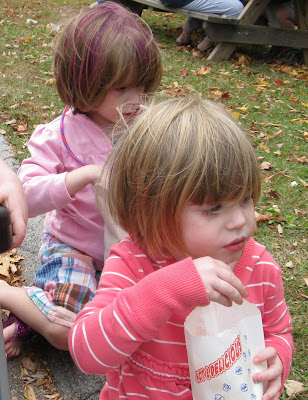 They had popcorn, which is one of their favorite treats. 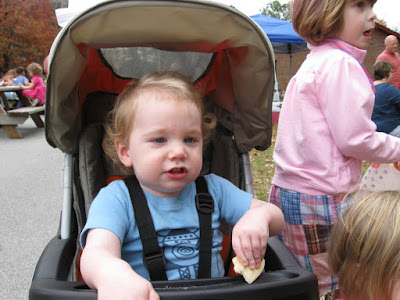 Although Michael didn't get to play many games, he still had fun, too. He was in the nursery while I worked the cookie walk and he didn't want to leave.
The girls also won vouchers to take to the pet store for free goldfish. It remains to be seen if those vouchers will get "lost" or not.
It was a very nice afternoon. The only thing missing was their Daddy.
Posted by AER at 12:19 PM No comments: Links to this post

Michael and the Whale 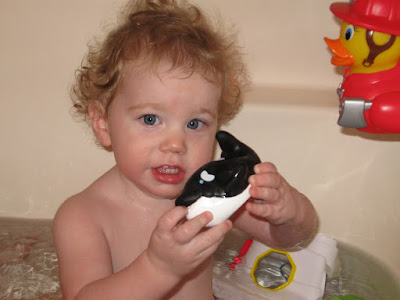 Posted by AER at 2:14 PM No comments: Links to this post 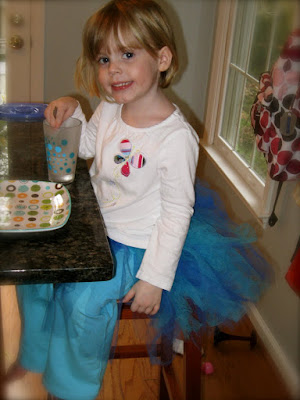 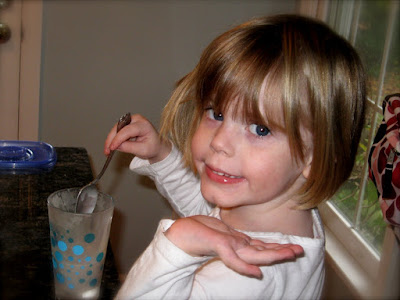 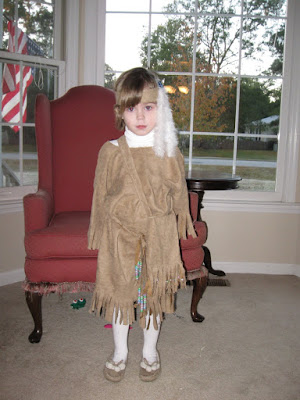 She was not so happy about getting her picture taken before she went to school Friday, but here is Grace, Indian Princess.
Annabelle was not interested in getting her costume on, since she knew she couldn't go to school or trick or treating because of the pox. Hopefully she will put it on later. And then maybe Michael will give it a try as well. Look for a cowboy and cowgirl coming soon...
Posted by AER at 10:02 AM 1 comment: Links to this post

The Face of the Pox 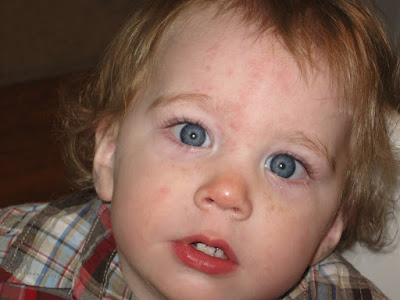 Here is a shot of Mr Michael. He is looking better, but still some pox on his face. 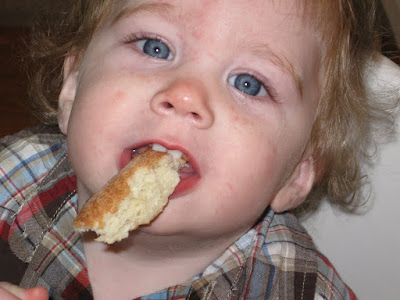 As you can see, pizza makes it all easier to deal with.
Posted by AER at 9:57 AM No comments: Links to this post